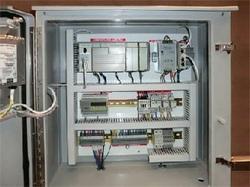 With sincere intentions to preserve and uplift our reputation in the market, we bring forth a distinguished assortment of Control Panels using plc(programble logic controller). Our offered panels are manufactured using utmost-grade components and assembled with technically advanced relays and contactors. The offered panels are extensively used in various industrial applications. Known for their efficiency and consistent performance, these have become the first choice of the customers. Features: Durable finish standards Low maintenance Compact design

By utilizing skills of our experienced professionals, we are providing our prestigious clients with a qualitative assortment of Shrouded Bus Bar System. Owing to Features like high efficiency, low maintenance and corrosion resistance, these systems are extensively demanded by our clients. Besides being fabricated using high-grade material, these systems are tested thoroughly on a series of parameters to deliver best possible contentment from our end. Features: Compact design Sturdiness Highly durable Specifications: Amperage: 60Amp1200Amp GI: 60 A to 125A. Aluminium:125A to 500A. Copper jointless:25A to 200A. Copper:160A to 1200A. Length: 4.5 m

A data logger (also datalogger or data recorder) is an electronic device that records data over time or in relation to location either with a built in instrument or sensor or via external instruments and sensors. Increasingly, but not entirely, they are based on a digital processor (or computer). They generally are small, battery powered, portable, and equipped with a microprocessor, internal memory for data storage, and sensors. Some data loggers interface with a personal computer and utilize software to activate the data logger and view and analyze the collected data, while others have a local interface device (keypad, LCD) and can be used as a stand-alone device. Data loggers vary between general purpose types for a range of measurement applications to very specific devices for measuring in one environment or application type only. It is common for general purpose types to be programmable; however, many remain as static machines with only a limited number or no changeable parameters. Electronic data loggers have replaced chart recorders in many applications. 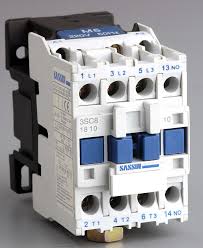 In semiconductor testing, contactor can also refer to the specialised socket that connects the device under test. In process industries a contactor is a vessel where two streams interact, for example, air and liquid. See Gas-liquid contactor. A contactor is an electrically controlled switch used for switching an electrical power circuit, similar to a relay except with higher current ratings.[1] A contactor is controlled by a circuit which has a much lower power level than the switched circuit. Contactors come in many forms with varying capacities and features. Unlike a circuit breaker, a contactor is not intended to interrupt a short circuit current. Contactors range from those having a breaking current of several amperes to thousands of amperes and 24 V DC to many kilovolts. The physical size of contactors ranges from a device small enough to pick up with one hand, to large devices approximately a meter (yard) on a side. Contactors are used to control electric motors, lighting, heating, capacitor banks, thermal evaporators, and other electrical loads.

In the electrical wiring of buildings, a cable tray system is used to support insulated electric cables used for power distribution and communication. Cable trays are used as an alternative to open wiring or electrical conduit systems, and are commonly used for cable management in commercial and industrial construction. They are especially useful in situations where changes to a wiring system are anticipated, since new cables can be installed by laying them in the tray, instead of pulling them through a pipe. 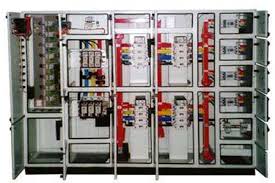 Bus coupler is a device which is used to couple one bus to the other without any interruption in power supply and without creating hazardous arcs. Bus coupler is a breaker used to couple two busbars in order to perform maintenance on other circuit breakers associated with that busbar. It is achieved with the help of a circuit breaker and isolators.